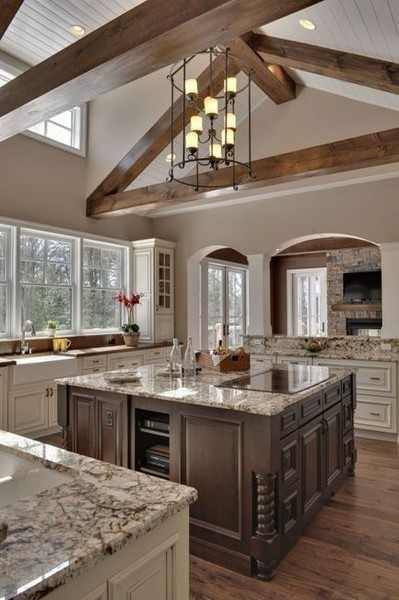 The kitchen countertop is a concept that gained traction in the 20th century. Before natural stone materials like granite and marble became the most favored ones in the kitchen, the early nineteenth century kitchens featured wood, steel, tile, and plastic laminates. Wooden tables in the olden days were used to chop, grind, mash or knead food. The most stylish royal homes featured the rare metal counters while some marble was in use in the pantries. The worktop was usually a wood table or a dry sink while stone, slate, and soapstone were used as wet and dry sinks.

Victorian era kitchen worktops
Kitchens in the Victorian era were typically located on the lowest floor or below the ground of the house. Floors were covered with linoleum to facilitate cleaning. While a separate small pantry existed for storing glass, silver, and China, the ideal kitchen also had one or two small sinks. The “fitted kitchen” concept emerged in the 1930s where appliances were integrated within cabinetry. The major transformations in this time related to beautiful interior designs and seamless workflow. In the 1970s, the kitchen emerged as the hub of social activity while it was in the 1980s that the concept of an open kitchen emerged. The early 20th century was when the kitchen countertops made an appearance.

The advent of granite
Granite was a relatively novel concept until early the 80s, but in 1987, granite countertops gained popularity. The natural stone was available in two different colors at that time. Within a decade, granite emerged as the most wanted countertop material and continues to be the hot favorite natural stone across the globe.

Ubiquitous in kitchens, granite is a versatile material because of the wide array of patterns, colors, and types. Most granites are nonporous which gives them a definite advantage over traditional soapstone. Lighter granites can be an excellent replacement for marble while gray and black granites are low on maintenance and fit in with almost any décor or color themes in the kitchen.

While maple, oak, and pine wood were the top choices for kitchen worktops before the 20th century, granite has many more advantages over traditional materials. Not only is granite tougher than Formica, wood or soapstone, but it is also scratch and heat resistant. The color of the natural stone does not fade over time, which means your kitchen can retain its stunning look for years to come.

Marble Unlimited is a family-owned business. Established in 1997, we served the entire state with high-quality flooring for commercial purposes. From there we expanded into customized marble and granite countertops.

Click Here to Make an Appointment before coming in